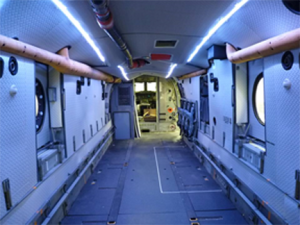 Kennon aim is to change the way military transport aircraft are insulated, by replacing the commonly used “quilted blanket” insulation to a safer, precise fitting, sound-dampening cabin liner system, as will be installed on these 12 HMX-1 helicopters.

Founded in 1984, Kennon protects high value assets for the U.S. Military, commercial and private aviation, aerospace, original equipment manufacturers, health care, and energy clients across the globe. Kennon’s team of engineers, technical designers, and production experts employ advanced material and fabrics to produce superior, safer, custom covers, precisely fitted to last for the long-haul.  Kennon is well-known for its military aircraft covers, the Kennon Sunshield and its many aircraft, aerospace and industrial covers and solutions.  In addition to its ongoing collaborations with the U.S. military, the Office of Veteran’s Affairs, and Universities throughout the nation, Kennon actively engages in SBIR research and development, ensuring that it remains at the leading edge of materials science and manufacturing.

This entry was posted in Uncategorized. Bookmark the permalink.